List of Fundraiser Ideas and Fundraising You Can Organize 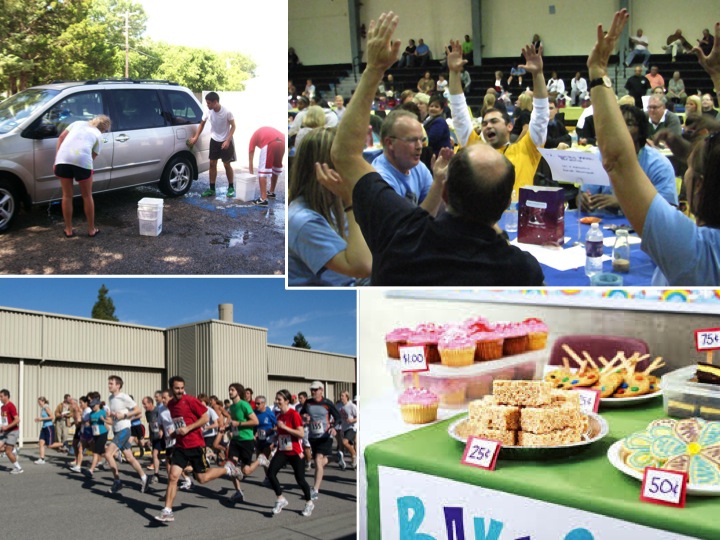 Fundraising for your church, school, sports team, community project, non-profit organization, sick relative, or any other cause you have can be challenging. Your helpers probably don’t like fundraising as they see it as asking for money and with the economy, people seem even more afraid to ask.   You will always be able to find ways to get donations, especially if you offer them something fun or a great experience for their donation.

So, here is some information and ideas for different types of fundraisers so that you can see what options are out there and decide which route or routes you’d like to venture down.

The bake sale fundraiser is a good idea for a small project.  Usually a cause won't bring in thousands of dollars from running a bake sale, but it is a good way to get people who wouldn't usually donate money involved by donating their home made goods.  So a fair amount of monetary donations can be gathered, but an awful lot of trouble usually seems to go in with only a small return because you cannot charge much for baked goods or else people won't buy them.  Also, remember that food donations are KEY here.  If you don't get enough donations, you can't make any money because no one likes to buy store-bought items at a bake sale.

Trivia Night fundraisers are by far what we recommend most to anyone looking for a fundraising idea.  The main reason we love a trivia night for your organization is that people LOVE trivia nights.  Now, not all people like them, but a majority of people just love going to trivia events.  The brain-teasers, the socializing, the booze (if applicable), and the food all seem to have everyone leaving with a smile on their face all the while your organization is raking in the dough.

You charge $150-$300 per table of 8-12, spread the word, get some great trivia questions and a PowerPoint made, have a night full of raffles and silent auctions, and you walk away with at least a couple thousand dollars if your night is big enough. AND, if people have a good time, many will look forward to it next year.  Nothing beats getting donations from people willing to give them because they are having fun.

If you are at all interested in how to put on a trivia night or how to run a trivia night for your fundraiser, please take a look around this site for great information on planning a trivia night and even how to buy your trivia questions and answers quickly.

We've all seen the car wash fundraiser before.  Workers washing the cars while others are dancing by the side of the road holding up "car wash" poster boards.  I've worked at many of these before and they are hardly worth the hassle. Plus you open yourself (and your children) up to liability if they drop their sponge on the parking lot and use part rag and part gravel to wipe their car again.  That's never a good thing.

Ah that knock on the door from a friendly neighbor kid looking to sell whatever her/his school has sent them around promoting this year.  I for one hate these types of fundraisers but many people like them because they can net a lot of money for the school fundraiser, troop fundraiser, 4H fundraiser, church fundraiser, etc.  This is especially true if you have a very large group.

Plus, if you are selling something that people actually NEED or use often instead of blingy gifts, you are more likely to raise a good amount of cash in your selling fundraiser.  You can even make it interesting by having sales contests!  People LOVE standing in those money machines with dollar bills flying all around them!

Really the only cons here are that you need quite a large group (or some AMAZING uninhibited sales people) and that it can take a few months to raise the money and get everything settled with the fundraising company.

Head Shave or Other Empowering or Embarrassing Event Fundraiser

These work great to both tell about a cause and to get people, even those you wouldn't think, involved.

Having a head shaving event is a great way to raise money for a cancer patient or to find a cure for cancer.  There are two ways to do this:

1.Have the people who are willing to get their heads shaved collect money and tell people that ONLY if they reach a certain amount will they do it.  This is especially effective for people in authority: bosses, teachers, principles, coaches, etc.  This then urges the employees, team members, students, parents, etc. to donate because they WANT to see this person get their head shaved.

2. Another way is to just have the people who are willing to have their head shaved at the head shaving fundraiser say that they are doing it and ask for donations.

Other ideas for this type of fundraiser event are having the person kiss a pig, get a pie in the face, be dunked at an assembly, or other funny things that won't damage their character too much. :)

A rummage sale fundraiser is where you have people bring all their junk to you and your organization, you organize it and put prices on the items, you work the event, and you keep the donations.  Then, afterwards you find something to do with everything left over.

With a rummage sale, it is definitely easy to get donations, but you really can't make THAT much because you are selling other peoples' used stuff. And you then have to find a place to dispose of all the left-overs.  Rummage sales are good to raise maybe a couple hundred dollars if you have a large congregation or community that will come.

Similar to trivia night events, dinner and auction fundraisers are a great fundraising idea because they don't give people more junk that they don't need. Rather you raise money by giving them a nice experience to get their donation. However, dinners are more expensive for YOU than trivia nights as at most trivia nights you only provide beverages.  All food is up to the trivia patrons.  With a dinner, you provide food (which better be delicious, i.e. expensive) and beverages. Plus you have to decorate all fancy and everything.  You can CHARGE more for it.  So that is a good thing.

But remember: You're more likely to get a bigger turn out at a casual, fun event than a formal event in most fundraising situations.  People like to have FUN.

Have your school band or maybe a talented in your musician agree to perform for a concert. Or find a local celebrity on their slow season who would donate an hour or two of a performance for your group.  You can charge a little more than normal because it is for charity.  And to make the experience even better think of some little touches that would make it a night your donors won't soon forget with special mini snacks (that were donated of course) or maybe an experience give away that you don't has no cost, but would be meaningful to a winner.  For example, maybe raffle off 4 front row seats to the high school play or the children's annual musical.  It's priceless to the recipients.

Make sure you publicize it!

What's the big thing around you?  Baseball? Soccer? Bowling? Figure out what would draw the biggest (and most fun) crowd to your event and have a tournament.  People like to be competitive so if they can do that AND be giving to a good cause, it's a win-win.