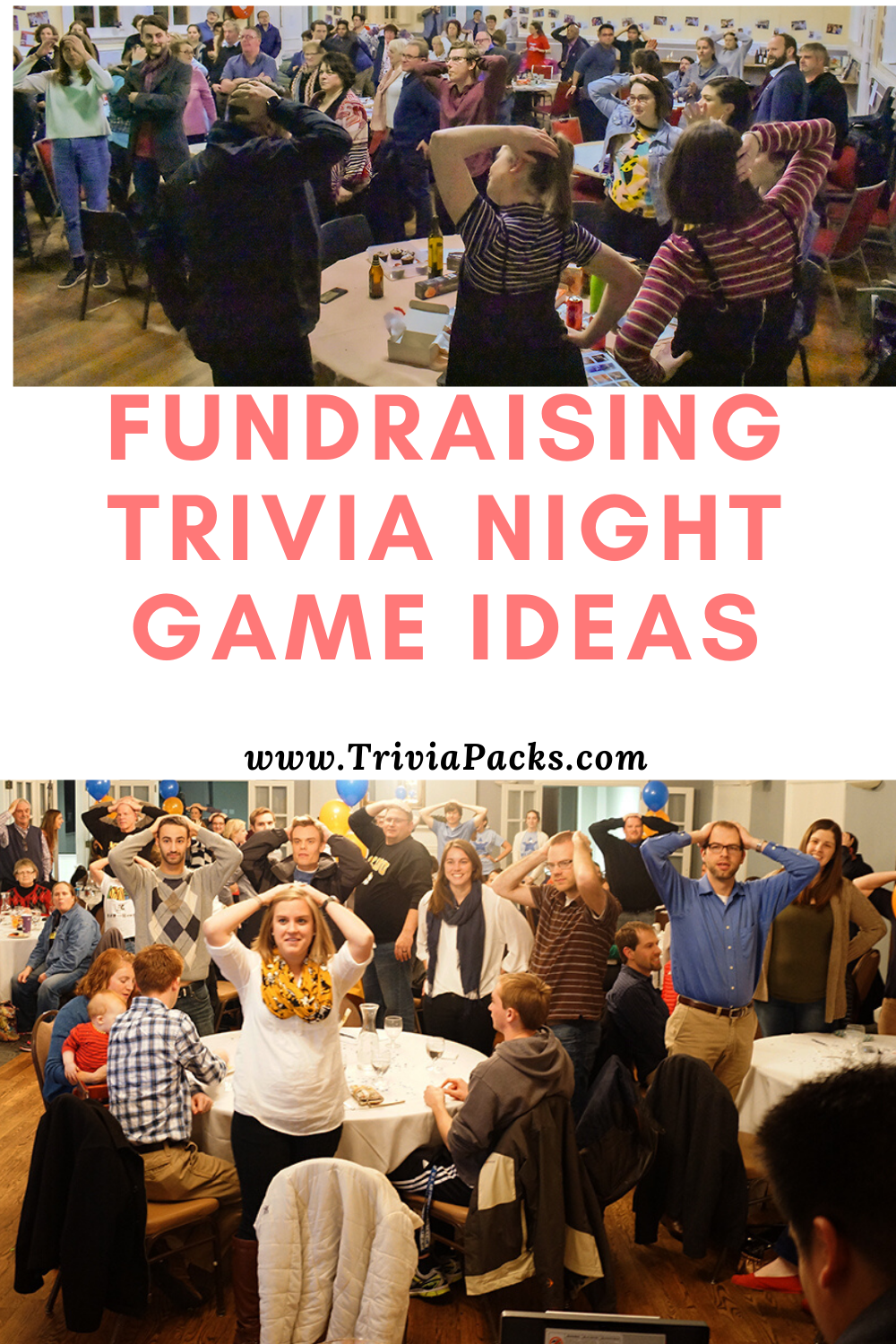 Trivia nights are a fantastic way to raise money for any cause since they really just count on the community surrounding the cause. If each of your supporters, members, teammates, etc. just get one table of 8-10 people together once a year, you’ve got quite the crowd! And at $15-25 per spot at the table, the dollars add up quickly with not much expense on behalf of the organization hosting the fundraiser trivia night.

Besides the cost to play at a trivia night, another way to raise more money from those already there is to have fundraising games for trivia nights to play between your rounds of trivia. Now, as we have mentioned on other pages of the site, you do NOT want to get carried away with this and take the focus off the trivia. Otherwise, 1. people who don’t want to participate in the extra trivia night games between rounds will get bored 2. Your “trivia night” will drag on for way too long or 3. Your players may think you keep asking for too much money. So, it’s definitely a balancing act to get some fun games to play at trivia into your event to raise some money and to keep the TRIVIA night moving along at a fun, good speed.

BUT, if you do want to incorporate some fun trivia night games and activities, here are some ideas with:

Special Note Regarding Prizes: We don’t ever recommend giving away extra points for trivia as a prize. We feel like this kind of goes along with the whole (no purchase necessary to win) thing and doesn’t penalize people who already paid to come play trivia for not donating more. And, if you have some teams that are really close at the end in trivia points and someone wins because they got an extra point for being best at the dance off? That leaves a bad taste in the 2nd place winners’ mouth. Keep all other event prizes and points separate from trivia points.

When to Play: Long break in middle of trivia night

How It’s Played: For this game, it’s best to have a PowerPoint with famous peoples’ names and, even better, a picture of them in their prime or in at least what people remember them most as. Then, you’ll make an announcement, for example: “We are going to play a game of Dead or Alive! The cost to play is only $1 and we will be showing the names (and pictures) of a famous person. Your job is then to show us, with the signals we show you, if you think they are dead or alive. If you get it right, you keep standing, but get it wrong, and sit down. It’s kind of like heads or tails, except you have an actual guess…not just luck. Last one standing wins $x and you’re supporting a great cause! So, anyone who wants to play, please stand up and hold up your $1 so we can come around and collect them. Then, we will get started”

So, once you collect all the $1 bills and you have your crowd standing, it’s time to go! First name goes up, then you ask “Ok. Here we go…. Dead or Alive?” and have people make a sign to say if they think that the person is dead or alive. The most common sign I have seen is just a thumbs up for alive and a thumbs down for dead. But you could do a thumbs up for alive and arms crossed on your chest for dead (like Dracula is supposed to have slept ha ha). Or any signals you want. Just make sure that they are easy to see what they are guessing so it isn’t vague.

Then, when people are settled, you show/say the correct answer. Whoever is wrong, is instructed to sit down and whoever is right keeps standing. Last one standing wins.

This is a longer game since 1. you usually give people a bit more time to figure out if they/their table (this becomes a team contest once there is only one person left standing representing the table) thinks the person is dead or still alive. :) And that’s how you want it: as many involved and having fun throughout the whole thing as possible. 2. This is a game based on knowledge; not just random chance. And some groups are WAY more knowledgeable about whether people are dead or alive to keep more people standing for a good while.

IF you reach then end of your dead or alive trivia famous people listings OR it gets to 15 minutes, go to a sudden death tie breaker question like one of these where its closest without going over, like how many bottles of Coke do they

Prize: Last one standing wins some amount of prize money (from what was gathered to play the game) or a different prize specified before (ex. a prize basket, donated tickets to a sports game or passes to the Zoo or a bucket of booze). If you do a cash prize, I think anyone is happy to win $10-50 from playing this as they only paid $1 to play. Up to you for the amount.

When to Play: Long break in middle of trivia night

Supplies Needed: 1. A coin or an app the randomly does head or tails (this goes MUCH more quickly) For this game, it really is best to have a heads or tails phone app, but if you don’t, a coin is ok. It just goes MUCH quicker with the app as it is an instant answer versus maybe dropping the coin or something. 2. People to collect the $1 bills.

How It’s Played: In the break you are going to play this game, you’ll make an announcement, for example: “We are going to play a quick game of Heads or Tails! The cost to play is only $1 and we will be playing the classic Heads and Tails. So, we’ll be flipping a coin up here and you’ll be guessing head or tails by putting both of your hands on either your head OR your tail; no one on each. We’ll catch ya (ha ha). If you guess right, you keep standing, but if you’re wrong, take a seat Last one standing wins $X and you’ll be supporting a great cause! So, anyone who wants to play, please stand up and hold up your $1 so we can come around and collect them. Then, we will get started”

So, once you collect all the $1 bills and you have your crowd standing, it’s time to go! So say, “Ok. Here we go…. Everyone, place your hands for your guess of heads or tails?” and have people land on their guess. Then, when people are settled, you say what the coin said (Heads or Tails). Whoever is wrong, is instructed to sit down and whoever is right keeps standing. Last one standing wins.

This is a longer game since usually lots of people play and it all just has to do with the guesses. So, it could take 4 minutes or could take 10. When you get down to about 10 people still standing in the room, have them come up to the front of the room to continue playing. This gets all the tables watching and forms cheering sections from tables with representatives up there. Play until there is only one person who guesses it right.

Sometimes this will get down to 2 people where one picks heads and one picks tails to determine the winner.

Prize: Last one standing wins some amount of prize money (from what was gathered to play the game) or a different prize specified before (ex. a prize basket, donated tickets to a sports game or passes to the Zoo or a bucket of booze). If you do a cash prize, I think anyone is happy to win $10-50 from playing this as they only paid $1 to play. Up to you for the amount.

Time Taken from Trivia Night to Play: ~1 min (To announce answers after they play…; that’s it). They will lose some time on a break, but they wanted to play this so it’ll keep them entertained.

When to Play: Pass out sheets to tables that registered to play (or that say they now want to play) at a 10-minute break sometime in the evening, but not when you have another full room, active game going on.

Supplies Needed: Print outs of the Trivia Sheet for the tables that want to play

How It’s Played: When people are checking in for trivia night, offer this as an additional challenge for their table and a chance to win some extra dough. So, the same place you are selling mulligans, you can sell this DIY game. Let the players know that at the end of round X, all registered tables will be given this visual trivia sheet to answer the questions on. You will also let them know what the subject matter is and tell them that they will have until the end of the break to turn it in.

So, once you have your tables registered and that break rolls around, make an announcement, for example, “We have a bonus visual trivia challenge going on tonight. Some of you have already signed up at registration, but if anyone else wants to play, raise your hand and we will bring it around to you. This is a VISUAL trivia challenge and the cost is $5 per table. You’ll have until the end of this break (about 10 minutes) for your table to complete it. The winning table will get x prize or $y. So those are being delivered to you now. Good luck!”

For this game, you’ll want to do visual things so it is not easy to google, as…well…people cheat. :) You want about 15-25 questions/items and you want it to be pretty darn HARD for 60% of the questions. So, some good examples I have seen of this are:

Just anything people can’t easily describe into google and get an answer.

Then, towards the end of the break, let people know they have 2 minutes left to get to the judges table. Then one minute and say they NEED to be in now. Everyone in? Ok. Next, take the time needed to grade them quickly. You’ll probably want a few people on this to go fast.

As they are grading, you can announce the answers. “Number 1 was x. Number 2 was y.”

Then, once you have the results, if only one team won, announce them as the winner. But, if you have more than one team that tied, put them into a raffle and draw from those that tied and then announce the winner. Finally, deliver their prize to their table.

Prize: Top table (or raffle winner) wins some amount of prize money (from what was gathered to play the game) or a different prize specified before. I think anyone is happy to win $5-10 per person at the table from playing this as they only paid $5 a table to play. Up to you for the amount.